The mobile app called Trip is designed to "expand your mind."

Now for something really trippy.

A company called Field Trip Psychedelics Inc is soft-launching an app that helps guide those taking psychedelics by offering "tools that support self-exploration and consciousness expansion."

The app is fittingly called Trip. According to a press release:

It blends modern understandings of neuroscience and psychology with the wisdom of experienced practitioners in meditation, breathwork and self-exploration. It supports users with intention setting, mood tracking, guided journaling and integration and personalized music that has been scientifically designed to help guide you through emotions associated with different intentions.

The app asks you questions such as: “What type of trip are you taking?" and "How far are you looking to go?” It then provides a gentle musical soundtrack as it asks a few questions about your state of mind. In all, the app breaks the experience down into four stages: Preparation, Exploration, Reflection, and Integration. Each stage is designed to "help the users start the working of emotional processing and integration of what they experience in their consciousness expansion efforts," according to a press release. 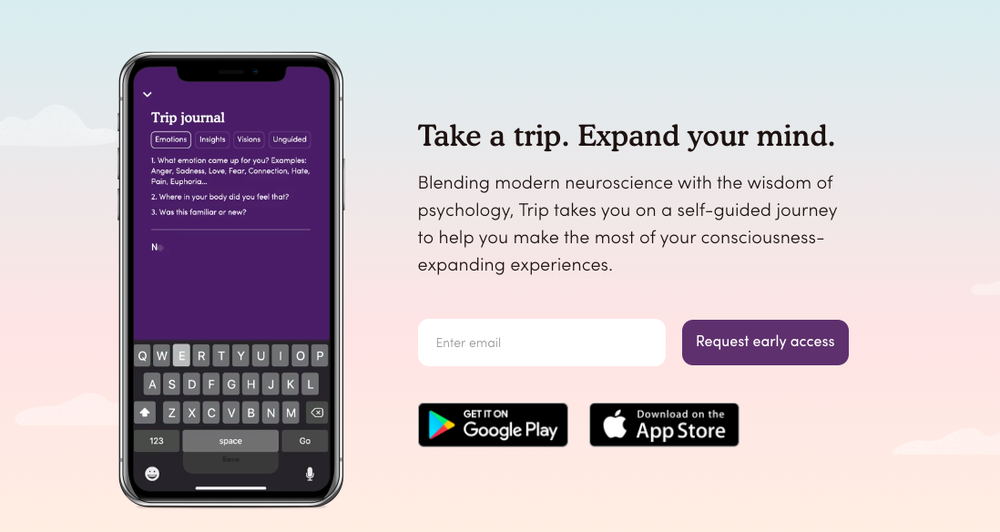 The app is the digital companion to Field Trip Psychedelics, Inc, which sounds like a secret government program but is actually a network of clinics in Toronto, New York, and Los Angeles. There, "patients settle into rooms filled with Svago zero-gravity leather recliners and weighted blankets and take an ego-quieting psychedelic substance under the supervision of a Field Trip-trained therapist," according to an article in Wired.

While federal regulations restrict centers like Field Trip to give patients drugs such as MDMA or psilocybin due to their Schedule 1 status, the centers are permitted to administer ketamine to select patients.

"As we began building out our network for Field Trip Health centers across North America, we saw that there is a large population of people who were keen to start, or were already actively, working with consciousness expansion and emotional processing through meditation, breathwork and legal natural or medically prescribed products. But they were often doing so by themselves and without proper support or understanding of best practices. So we decided to take the custom developed protocols that we were building for our Field Trip Health centers and make them available to a much broader audience. "

The company stresses that the app is no substitute for properly supervised medical and psychological care. But it's also probably a lot better than tripping by yourself.

Related: Psychedelics: The Next Wave For Investors?