Research: Most U.S. Cannabis Cultivators Choose to Compete on Quality Rather Than Cost (Chart)

Many wholesale growers are focusing on cannabis quality, though market forces tend to favor those who reliably supply low-cost cannabis.

By Eli McVey
July 19, 2019
This story originally appeared on MJBizDaily

Many wholesale cannabis growers choose to compete on quality, even while market forces favor growers who can reliably supply low-cost cannabis.

Nearly half of U.S. cultivators are attempting to make high-quality flower their key differentiator, according to the recently released 2019 Marijuana Business Factbook. But with flower sales on the decline, the market likely will prove unable to sustain that proportion of growers competing on those grounds alone. 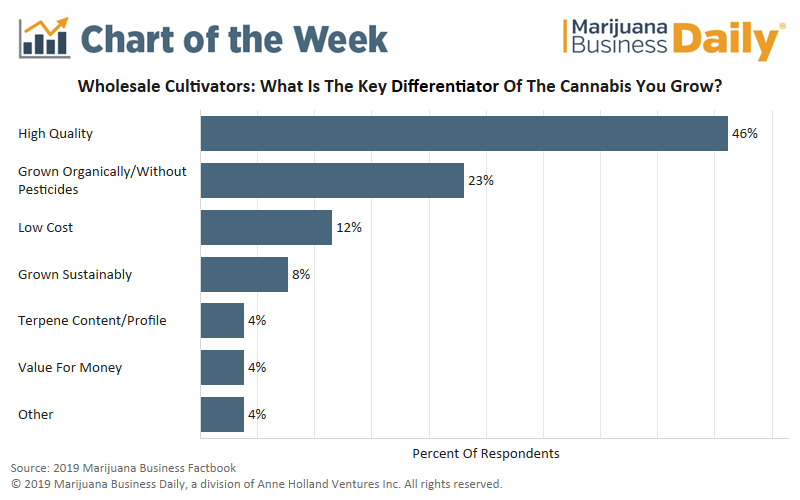 In the extract market, consumers have shown a preference for high-potency, low-cost concentrates, creating high demand for inexpensive flower. Demand for high-quality concentrates may increase as cannabis use continues to become more mainstream, though it’s unlikely to supplant low-cost, value-oriented concentrates in the near future.

While there may be an immediate opportunity for growers to specialize in and provide low-cost product if and when marijuana is legalized at the federal level, all but the largest and most efficient cultivators ultimately may be squeezed out of the market for value cannabis.

If large-scale retailers, such as big-box and grocery stores, eventually are able to sell cannabis, these outlets likely will offer prices that small-scale producers cannot match. However, experienced marijuana business owners caution that as cannabis becomes a commodity, the value of a company is more dependent upon brand reputation and products lineup than price.

Value-added cultivation -- such as sustainable and organic production -- could emerge as a key segment similar to the food industry. That creates a proverbial tightrope for cultivators to walk: They need to understand that meeting the current needs of the market for low-cost cannabis could come at a huge price if a major shake-up -- such as federal legalization -- occurs.