The 20 Best Cities to Get Stoned (Legally)

A new survey ranks the most cannabis-friendly cities. How did yours do?

With more states legalizing marijuana, the opportunities to consume the plant legally are multiplying. But where are the best places to live or travel to enjoy a smoke or a dab?

LawnStarter, a lawn care company, knows a thing or two about grass. Recently, they ranked 2021’s Best Cities to Get Stoned by comparing 94 U.S. cities (where recreational marijuana is currently legal) for 12 key indicators of weed friendliness, including the volume of Google searches for “marijuana” and “weed,” access to dispensaries and head shops, availability of 420-friendly lodging and smoking lounges, and the legality of home growing.

"LawnStarter is focused on helping people with their weeds and grass — of the lawn variety — and we thought the other grass topic (where it's legal) was a fun one to explore," says editor-in-chief, Jeff Herman.

Related: New Study Reveals Where To Buy The Most (And Least) Potent CBD

Perhaps unsurprisingly, Colorado cities ranked high on the list. Colorado was the first state to go recreationally legal in 2012, so they've had a head start.

The Mile High City Denver was ranked the top city to get high, according to the survey. The city dominated the social environment category, with more 420-friendly lodging establishments and social consumption lounges. But they didn't top every chart. Denver fell short of other cities in the number of dispensaries, head shops, and Google search popularity.

Colorado Springs and Lakewood also finished strong, at Nos. 7 and 18 overall, respectively. Only Fort Collins, in 63rd place, didn’t do as well.

The Golden State also performed well on the Best Cities to Get Stoned list, with five cities ranked in the top 10: LA, San Fran, Fullerton, Garden Grove, and Glendale. With its 4 million residents, Los Angeles swept all competitors in the popularity and supply-access categories.

New kids on the block

Cities in the newest states to join the legalization movement — Arizona, Illinois, New Jersey, and New York — placed in the bottom third of the rankings.  Tucson, Arizona landed at No. 85; Rockford, Illinois at No. 91; and Newark, New Jersey at No. 90. Even The Big Apple was close to the bottom of the list a No. 77.

But these cities just legalized and many haven't had a chance to get rolling yet. Despite the odds, some unlikely locations are already making a major at the top spot. Paterson, New Jersey, for example, registered the most residents searching for weed online. 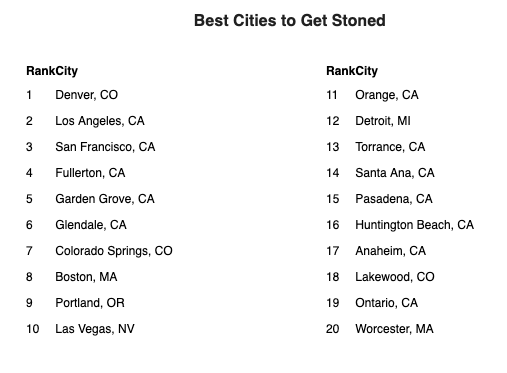 For a look at the full list go here.